Zach Hilpert joined the Interdisciplinary Studies Program in August of 2017 after teaching in VCU’s Department of Focused Inquiry for six years. A native South Dakotan who has made his home in Virginia for more than a decade, Dr. Hilpert earned his Ph. D. in American Studies from the College of William and Mary in August of 2014, specializing in American history, urban studies, and visual culture. His diverse scholarship has explored topics ranging from the visual depiction of urban disaster in the United States, to presidential visits to the state of Mississippi. Dr. Hilpert has taught courses ranging from “Interdisciplinary Foundations” and the BIS Senior Capstone at VCU, to “The History of the American South” and “History and Memory in the Urban Landscape” at previous institutions. An enthusiastic teacher and interdisciplinarian, he works to draw real and sustainable connections between the vital skills built in the college classroom, and the world outside the university’s walls. 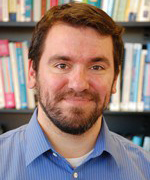